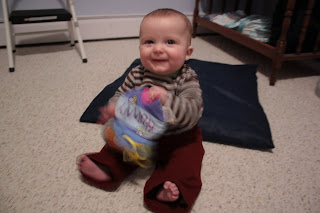 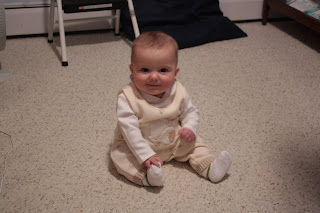 Liam turned half a year old on Tuesday of this week! I can't believe that he's already been with us for 6 months (although, according to my due date, he shouldn't have turned 6 months until February 7 -- I still can't believe he came 2 weeks early). This month he started sitting up on his own, and he is trying SO hard to do the army-crawl thing. He can turn himself from side to side, but can't go forward or backward yet. He has also started banging toys on the floor, which is cute. Cute, but headache-inducing!

He's still not very verbal (he coos and squeals, but none of the mamamama dadadada stuff that he "should"(??) be doing, according to my What to Expect book) but I keep telling myself not to worry and that it will come soon. He has his 6-month appointment next week, so I'll be sure to ask the doctor about that. Ahh, the worries of a first-time mom!

He's sleeping a little better at night...usually from 7:30-4 straight, and then a nap from 6-7 a.m. We've tried pushing back his bedtime to no avail (even if he goes to bed at 8, he still wakes up at 4) so we're sticking with the early bedtime to make sure he's getting enough sleep. And yes, we've tried everything -- later naps, earlier naps, dream-feeding, et cetera ad nauseam. I think we're just going to have to accept it for the time being. My saint of a husband usually gets up with him at 4 and stays up with him until 5, so as long as I go to bed early enough, I get 7 or 8 hours of sleep, which is plenty!
Posted by Alison at 3:39 AM