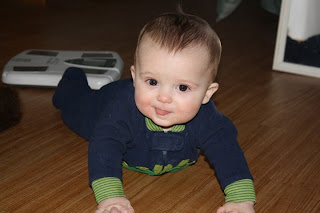 I can't believe my little boy is 7 months old (as of yesterday). For some reason, 7 months seems so much older than 6 months. I remember my friend bringing over her 7-month-old a few days after Liam was born and I couldn't believe how grown-up he seemed.

This was a big month for Liam. He went from being very quiet to very vocal and now babbles up a storm! He says dadada, mamama, bababa, wawawa, and is very into blowing raspberries. He laughs at everything. He isn't crawling yet, but he gets up on his hands and knees and rocks back and forth, which is SO unbelievably cute. People tell me that crawling isn't far away, but honestly, I'm in no hurry for him to reach that particular milestone! He is very into banging his toys together and on the floor.

Food: He's eating a lot more solids. He still loves his milk, but he's also into peas, bananas, plums, apples and pears. We had a bit of an "incident" earlier this month with Earth's Best corn and squash that got him sent home from daycare (let's just say we did 20 diaper changes in 24 hours), so that's off the list. He hates carrots. He likes to gnaw on saltine crackers (with the salt brushed off). Also, he can sort of hold his own bottle - he has the right idea, but can't always lift it high enough. I bought him a sippy cup, but he's definitely not ready for that yet.

Sleep is going much better. He's been sleeping 7:30-5:30 most nights with only one wakeup. We don't feed him anymore - instead we go in and pat his butt or rub his back for a few minutes (really) and he usually goes back to sleep. Occasionally, when he won't go back to sleep, he gets a bottle. And while I'm not thrilled to wake up at 5:30 every morning, it's better than our every-two-hours routine of the past few months.

Liam has turned into such a delight this month. His little personality is emerging and he's suddenly so much less fussy. I can't wait to see what the next month brings!
Posted by Alison at 5:54 AM