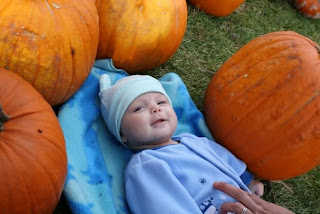 OK, so I've been bad about the blogging thing. Now that I'm back to work AND school (whose idea was this again?), it's really hard to keep up with anything. Part of me thinks I should ditch this blog altogether, but I know I'll regret not having an archive of Liam's first few months. I've been blogging for years -- now would be a really lame time to give it up! So, without further ado, here's the latest baby update.

Smiles constantly and belly-laughs when you tickle his neck -- CANNOT get enough of that laugh! I'll have to post a video one of these days.

Has figured out how to (intentionally) put his hands in his mouth.

Loves grabbing and touching anything he can get his hands on (especially blankets and clothes).

Hasn't started reaching for toys yet, but is completely fascinated by them -- he'll stare, smile and "talk" to them.

Loves his bouncy seat again. As a newborn he liked sleeping in it; from 1-3 months he hated it; now that he's noticed the dangly toys hanging from it, he likes sitting in it and watching them.

Is getting better head control and can "sit" when he's propped up. I've started facing him forward in the Bjorn and he loves to look around.

Has rolled over from tummy to back about 5-6 times, probably by accident.

Usually wakes up once per night to eat, around 3 a.m. But sometimes he'll surprise us and sleep for 11 hours straight, which is incredible!

Now that Liam is three months old, I think I can safely say that we've survived the newborn stage. And, admittedly, it was rough. Those first few weeks were the hardest weeks of my life. I didn't think it was humanly possible to survive on so little sleep and so much patience. Brad and I were laughing tonight about the "dark days" and the (few) things we remember about them. Remind me to tell those stories someday.

But we're out of the woods. Yes, he still has his screaming fits and his fussy days, but most of the time, the good times outweigh the bad. Around 10 weeks, Liam started developing a fun little personality. Brad and I love him more and more each day and can't believe we created this perfect little man!
Posted by Alison at 6:24 PM