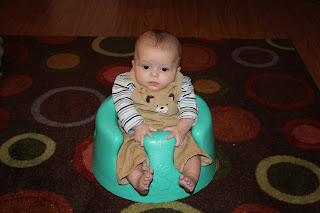 Well, we've survived -- or are surviving -- our first big scare. After a really fussy, grumpy day during which he refused to eat from 1 p.m. to bedtime, Liam woke up in the middle of the night with a 103-degree fever!

I had known something was up all day, but I chalked it up to teething so I wasn't too worried (just exhausted from pacing the floors with a crying 4-month-old all afternoon). But when I heard him fussing at 10:30, I knew something was very wrong. Normally when he wakes up in the middle of the night he's wide awake and very pleasant -- just hungry. But last night when I walked into his room, he was writing around in obvious discomfort with his eyes still closed. I picked him up, and even before I un-swaddled him, I could tell that he was burning up. When I saw 103 on the thermometer, I panicked.

I immediately gave him some tylenol and called our ped's after-hours number. They paged the nurse and told me they'd call back shortly. While I waited for the call, Brad paced the floors with Liam, who was crying weakly and clinging onto Brad's shoulder with one hand and sucking on the other. It was the saddest thing I've ever seen.

By the time the on-call nurse called back, the Tylenol had kicked in and Liam seemed to be perking up. His temp was down to 101 and he took in a few ounces of milk. The nurse told us to give him Tylenol every 4 hours if his fever spiked and to bring him into urgent care the next morning (no need for the ER unless his temp reached 105).

Before long Liam was smiling and cooing -- back to his old self. We waited another hour until his temp was back to normal before putting him back to bed. He then proceeded to wake up every hour for the rest of the night. He no longer had a fever, but just seemed really uncomfortable.

I took Liam to urgent care at 9 this morning and the poor guy was diagnosed with a double ear infection. Ugh! That explained the lack of appetite and fussiness from the previous day. He started antibiotics and seemed to be feeling a little better today, but he's definitely not himself and still doesn't have much interest in eating.

I know this is the first of many sicknesses, but it's so hard to watch someone so tiny and helpless suffer. I know how miserable I feel with a fever and I hate to think of my little guy going through it. I'm just thankful that it was "just" an ear infection and didn't end up being H1N1, which was my first thought.