Learning to flip over from front to back (although he still looks slightly shocked every time he does it).

Belly laughing like crazy, particularly when you change his diaper (hey, it tickles!)

Squealing at the top of his lungs when he's excited.

Grabbing toys from his Baby Einstein gym and pulling them to his mouth.


As Brad said in his last post, we've been having some big troubles with Liam's tiny tummy lately. He launches into blood-curdling screaming fits after eating that are almost certainly related to belly pain, since the only thing that makes him feel better is holding him against your chest (pressure on the tummy I suppose). I brought him to the doctor last week and she suggested trying a new hypoallergenic formula (yummy!) called alimentum. She gave us a couple samples to test out. It's stinky and it makes his burps smell horrible, but if it isn't working wonders. That's the good news.

The bad news is it's about twice as expensive as the formula he was on before, which wasn't exactly cheap. And the kid is a serious eating machine -- apparently at daycare they call him "little piggy." But what else can you do? Just look at that happy face. Who cares if we have to sell our kidneys to keep him fed. ;) 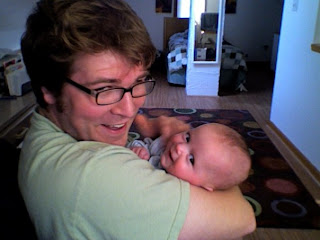