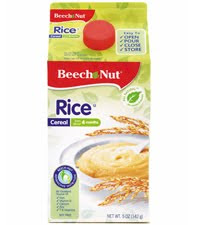 Since Liam turned 4 months old on Thursday, Brad and I decided to start him on a little rice cereal this morning. I'd originally planned to wait until 5-6 months to start solids (since I have allergies myself and Liam had eczema as a newborn, he's prone to allergies), but he was definitely showing the signs of being ready. He's starting to act bored with his bottles and many times is more interested in chewing on the nipple than drinking; he puts everything in his mouth; and he's now waking up several times a night, ravenous, and will take down 6-8 oz. in a single sitting. But the real clincher for me is how much he LOVES "eating" his amoxicillin, which is what he's getting for his ear infection. We give it to him in a baby medicine spoon twice a day, and he gets such a kick out of eating off the spoon and "chewing" the medicine in his mouth (it's liquid, but much thicker than formula).

This morning's feeding was a great success! We made a thin mixture of cereal and formula and fed him three small spoonfuls. He seemed to really like it and didn't even make too much of a mess. By the third spoonful he started making funny faces, so we decided it was time to call it a day. But he probably got about a teaspoon and a half in his stomach when all was said and done.

We'll watch him carefully for reactions today, and if all goes well, we'll try another feeding tomorrow morning. This time with pictures!
Posted by Alison at 7:39 AM