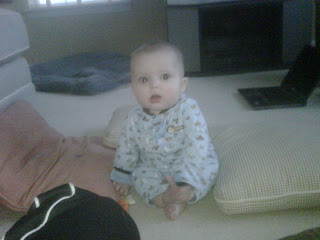 Wow, am I behind or what? I can't believe I used to be a once-every-other-day blogger. To my credit, work has been crazy and Brad & I were MIA for a week in his hometown. I promise to post more regular updates starting in January.

Liam turned 5 months on December 26th. He is:

-Rolling over like a mad man, making diaper changes close to impossible -- I do them on the floor now to keep him falling off the changing table.

-Sleeping on his stomach. I put him down on his back and he always flips over sometime during the night. The first time I walked into his room and he was fast asleep on his tummy, I freaked out. But there's not much I can do now! (Can you blame him? I hate sleeping on my back.)

-Sitting up unassisted! Well, for about 30 seconds to a minute before he loses balance and topples over, which is why we stack pillows around him (see picture above).

-Eating peas, carrots and sweet potatoes. He seems to love peas the most, which is hilarious, considering that they're the one food I won't touch.

-Teething(??). He has all the obvious signs, but we don't see any teeth poking through yet.

-Not sleeping well at all. He's regressed to 2-3 wakings per night and sometimes has a hard time going back to sleep after he eats. We had to stop swaddling him when he started to roll over, which doesn't help. I also think teething is a factor. I know he's capable of sleeping through the night, so I keep telling myself this is a phase (that's been going on almost 2 months...?)
Posted by Alison at 4:53 PM