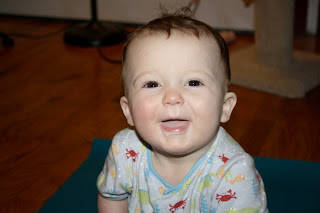 Phew. What a WEEK! Work and school are both crazy right now, and, of course, there's the teething baby situation. It's one of those weeks where I feel like I deserve a "Mom of the Year" award for dealing with all of it and not having a nervous breakdown, know what I mean?

For those if you who have been wondering, no, Liam does not yet have his first "toof" yet, but it's right there, about to poke through the surface, and surely bothering him. Allow me to explain...

Last Friday, I went to pick him up from my parents' house and I immediately knew something wasn't right. And for the next 36 hours, the "something isn't right" feeling continued. Feverish, watery eyes, sleeping horribly, not napping, refusing food, drooling and spitting up like crazy, wanting to be not just held but carried around 24/7 (thank God for the Moby Wrap), crying at random intervals, hardly smiling, etc. etc. Saturday was awful; he fussed for most of the day and he ran a low-grade fever off and on. I debated whether to bring him in to urgent care. Was it an ear infection? Strep throat? Reflux? Did I want to pay the $20 copay and expose him to loads of germs just to have the doctor on-call tell me it was just separation anxiety? (Believe it or not, that exact thing happened the week before.)

Not once did it occur to me that he could be teething. Not once. Despite the drool, the refusal of food, the constant chomping on his hand, the fact that he's eight and a half months and doesn't have a tooth yet.

Then again, I'm the woman who, at nearly 38 weeks pregnant, had bouts of severe back pain every 4 minutes and didn't even consider the fact that I could be, you know, IN LABOR. I was convinced that the pain meant something was wrong, so I went to the hospital. When the nurse told me I was in labor, I was all..."really? Labor? I'm only 38 weeks!"

Finally, on Sunday afternoon, I thought to put my finger in his mouth for the first time, and while feeling his bottom gums, I ran across a giant, swollen bump.

While no tooth has broken through yet and Liam is still gumming everything, his mood has markedly improved. The past three nights he's slept great (only one "fuss" each night, around 4 a.m., and he's gone back to sleep until 6:30 all three times), napped well, and seemed generally happy. I'm still walking on eggshells, though, just waiting for the next bout of teething hell...
Posted by Alison at 4:44 PM