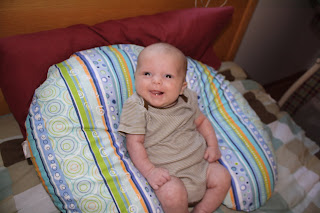 Smiling during a rare moment of daytime happiness....


According to all of “the books” (which everyone tells me to stop reading), fussiness/colic peaks around 6 weeks and gets steadily better until 3 months, when it disappears completely.

Hahaha ha ha ha. HA. If I weren't so frustrated, I'd actually be laughing instead of laughing sarcastically (and crying a little too).

Until 5 weeks or so, Liam was a fairly chilled-out baby during the day, but woke up every 2-3 hours at night. But as the the yin and the yang of parenting goes, as soon as he started sleeping well at night, he started getting increasingly fussy during the day. As his sleeping has gotten progressively better, his fussiness has gotten progressively worse. Now he sleeps anywhere from 6-8 hours at night (and when he sleeps for 6, he usually goes back to sleep for 2 or 3 after his bottle and diaper change). And, best of all, putting him to bed is the easiest part of our day. After his bath and bottle, he's so exhausted that he's usually sound asleep within 30 seconds of hitting the crib. I've heard stories of parents having to let their kids “cry it out” for an hour to get them to fall asleep at night, so I have nothing to complain about!

But as easy as the nights are, the days are rough. On the weekdays, when I'm home alone, I spend most of my day attempting to soothe a crying baby. Some days all it takes is putting him in his Moby Wrap and turning on the vacuum to get him to stop screaming. Other days, I try the Moby, the swing, the bouncy seat, the Baby Bjorn, walks around the neighborhood, rides in the car, and every other trick in the book (my book, not THE book) until he's so exhausted he screams himself to sleep. There is not much that keeps me going on those days aside from the unadulterated love I have for my son and the knowledge that there's no such thing as a colicky high school student (in other words, it has to get better EVENTUALLY).

Right now Liam's sitting in his bouncy seat in the bathroom with the water running and the fan on; after an hour of crying and fussing, he's sleeping, so hopefully today won't be “one of those days.” One of my friends, who has a 5-month-old daughter, told me that her fussy baby girl turned into an angel right around 12 weeks (which means a little less than 4 to go for us). I can handle another month of this -- RIGHT???
Posted by Alison at 7:38 AM