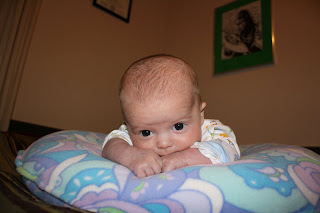 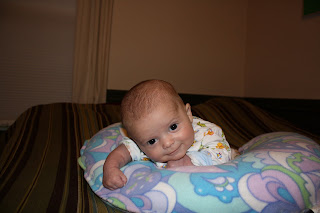 Liam had his two-month appointment last week (even though he was almost 10 weeks old). The dirt:

He also had his two-month vaccinations (one oral and three shots), which weren't as bad as I expected. He screamed from the pain but calmed down immediately after I picked him up and rocked him. He was cranky and fussy that evening, but that really is fairly normal evening behavior for him, so it's hard to tell if he wasn't feeling well. I gave him a small dose of Tylenol in the afternoon and he didn't run a fever at all.

He was also diagnosed with exactly what I and Dr. Google have suspected for the past month: torticollis. His head is tilted to the right as a result of tight muscles in his neck, and has caused him to favor looking to the right -- which, in turn, makes the tight muscles worse. (You can see the right-tilt in the picture above.) It's fairly common in babies, apparently. Dr. M. showed me some stretches to do with him a few times a day to help loosen his neck. If it doesn't improve in a month or so, Liam will have to go to physical therapy, but I think the stretches are already helping. Surgery is required in a few severe cases, so let's hope we can cure his torticollis naturally!

Dr. M. also said Liam needs more tummy-time to strengthen his neck muscles and help with his torticollis. (We try to do tummy-time a few times a day, but he gets so annoyed that it never lasts long.) After 4 days of a rigorous tummy workout schedule, I think we're already seeing results. Liam is holding up his head much better when he's on his stomach, and even rolled over on his own yesterday!

PS -- does this guy totally look like his mom or WHAT? He has Brad's hair and forehead, but he definitely has my eyes and nose. I love it!
Posted by Alison at 8:13 AM