The sleep habits of an 8-month-old 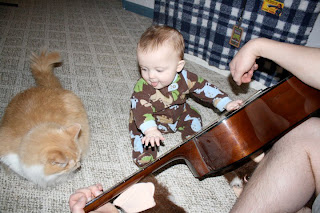 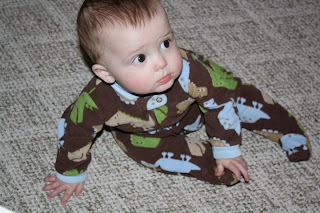 How did my tiny, cuddly little newborn boy turn into an 8-month-old? I never thought I'd miss those sleep-deprived newborn days but now I sort of do. It's going by so fast!

Month 8 has been a true delight. Liam's personality is really starting to come out. He's serious and brooding -- he likes to observe his world and take it all in before participating. He's all smiles and giggles at home and at my parents' house, but it always takes him awhile to warm up to new people. Sometimes he'll surprise you, though, by breaking into a big smile for a stranger at the grocery store. But usually he just gives them a stare that clearly says "who are you and why are you invading my world?" He loves figuring things out and you can just see the little wheels turning in his head when he plays with a toy.

Liam loves to eat, as evidenced by the adorable rolls on his arms and thighs. He can feed himself bigger pieces of food (crackers, teething biscuits, etc.) but doesn't have the pincer grasp down yet for small pieces. He's getting bored with purees -- well, except for the part where he tries to grab the spoon and feed himself!

He is thisclose to crawling. He can launch forward onto his hands and knees from a sitting position and back, but he can't move forward yet, which greatly frustrates him. He can stand while holding onto a piece of furniture and is trying so hard to pull up (especially in the bathtub...yikes). Every day we get closer and closer to mobility. He's been doing the hands-and-knees thing for about a month, so I'm sure it's only a matter of weeks.

He now says mama and dada, although he doesn't know what those "words" mean. He has a special relationship with our usually anti-social cat, Taka. She loves being near him and he gets the biggest grin on his face when she walks into the room. (Our other cat, Danny Boy, is terrified of him!) He also loves the neighbor's dog and will laugh hysterically when she licks his hand or his face.

He is starting to understand cause and effect, particularly when it comes to noises. Our quiet little guy gets such a delight out of banging things together or dropping something on the floor and the resulting noise. Lately he's gotten particular enjoyment out of putting his hand in my mouth when I'm talking. I have no idea what's so funny about that, but then again, I used to find Adam Sandler movies funny, too...

As wonderful as everything has been this month, sleep is still an issue in our house. Liam still isn't sleeping through the night most nights. It's funny -- when he was younger, the first question people used to ask us was "is he sleeping through the night?" How that he's 8 months, they don't bother asking us because, well, he's 8 months. Of course he's sleeping through the night! Sigh. On a good night, he wakes up once to eat. On a bad night, he's up three times (once to eat, and the other times he just wants to be held). We had some success with letting him cry it out last month, but then he got sick and everything went out the window. A lot of people say their bad sleepers became good sleepers around a year, so I'm hoping we can trudge through the next four sleep-deprived months!
Posted by Alison at 4:10 AM